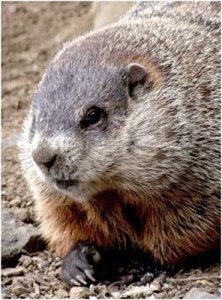 Buckeye Chuck coming out of his den in 2010

It’s that time of year again when we turn to animals to predict our winter weather.  It started in September when my friend, Dick Goddard, held his annual Woollybear Festival in Vermilion and this week the attention swings to Central Ohio and the appearance of “Buckeye Chuck” Ohio’s official groundhog who will be rousted out of his warm den and winter’s sleep to see if his shadow frightens him back into his den for another six weeks of winter.

A good friend, Scott Spears, a personality on WMRN Radio in Marion, Ohio tells me that their radio station is the official home of “Buckeye Chuck” and is actually where the Ohio part of the woodchuck legend was born.

Scott says it was back in the 1970′s when WMRN morning DJ, Charlie Evers, got tired of hearing all about Puxatawny Phil, that groundhog over in Pennsylvania.  Charlie figured, rightly so, that the weather in Ohio is often far different that in Eastern Pennsylvania where Puxatawny Phil dug his burrow.  Evers started a campaign to recognize an Ohio groundhog as our official weather prognosticator.  Coincidentally Evers had noted that a groundhog made his home at the edge of the WMRN Parking lot.

So this Wednesday, February 2nd crowds will gather in the WMRN Parking lot to wait as OOG officials haul the latest “Buckeye Chuck” from his den.  (Groundhogs only live about two years in the wild and so there have been several since Charlie Evers spotted the first one back in the 1970′s) and we will all finally discover if winter is just about over or will it last another six weeks….Stay tuned.

You can visit at daybreak to see what happens at the station at Clear Channel Headquarters at 1330 North Main Street, Marion or stop in at their website at http://www.wmrn.com