Neil Zurcher has been a professional journalist working mostly in television, where he covered world leaders and major events, like the asassinataion of President John F. Kennedy but he also worked  in newspapers,  magazines, and radio for over a half-century and has logged more than a million miles on Ohio’s roads over 35 years as a TV travel reporter. He was the original host of the “One Tank Trips” travel report, which aired on Fox8 Television in Cleveland and has since been imitated in other television markets throughout the US. Called “One of the most respected and knowledgeable travel writers in the state” by former Ohio Governor George Voinovich, Zurcher received the Distinguished Service award from the Society of Professional Journalism and the Silver Circle award from the National Academy of Television Arts and Sciences.  He also received a “Emmy” award. In 2013 he was honored with a rare Gold Circle Award for his fifty years in television.  He was given the coveted Award for Excellence in Broadcasting from the Cleveland Association of Broadcasters.  He has been inducted into the Cleveland Press Club Hall of Fame.   He was also inducted into the Ohio Broadcasters Hall of Fame and received their “Living Legacy” award in 2007.   Zurcher for many years wrote a  column for the Auto Club’s Ohio Motorist Magazine and for the Cleveland Plain Dealer and has written five books about Ohio, including Ohio Oddities and Strange Tales from Ohio. In 2012 he returned to television again doing One Tank Trips on Fox 8’s New Day Cleveland Show that airs each morning at 10 AM. In 2014 Neil marked sixty years as a professional journalist.
In August of 2016 he filmed the final segment of One Tank Trips” and retired from television. He still writes weekly on his website, “Neil Zurcher’s One Tank Trips”, www.onetanktrips.com

The Cars of a “One Tank Trip”

When the “One Tank Trips” series started in the spring of 1980 we had a promise of the loan of a replica 1929 Model A Touring car from the Ford Motor Company to use in our opens and closes.  Shortly before the series was to be shot I was informed that Ford had decided on some cost-saving cuts in their promotion budget and my “loaner” car was one of the cuts.

The very first year we shot I used my family car, a 1979 Ford Futura, two-door sedan.  We tied some boxes on the roof, stuck some water skis out of the window and tied a child’s plastic inflatable inner-tube to the rear of the car. To make it all look like a family car going on vacation.

The second season I happened to mention to good friends, Bonnie and Bill Cutcher of Vermilion that I would like to use an antique car in the opening of the series.  Bill, a car collector, offered to loan me his 1948 Lime Green Chevrolet Convertible.  For the next couple of years we used this car.  But it didn’t seem to resonate with the viewers.   Most were confused by its size and thought I was driving a Cadillac.  Bill then came up with a diminutive 1940 Bantam American Roadster, made in Butler, Pennsylvania and the forerunner of the World War II Jeep.

This proved to be very popular with our viewers and I started to get questions about “where’s your car?” when I would make any public appearance.  People wanted and expected to see me with the little Bantam.  Since I didn’t own it and the Cutcher’s had been nice enough to make it available for some of our personal appearances, I could see that eventually either I, or the station, had to buy a car for the series.

I settled on a 1959 Nash Metropolitan, a boxy little red and white convertible.  Problem was:  WJW-TV, also facing a budget crunch at the time, said no to my request to purchase the car.  So, after discussing it with my wife, I paid for the car myself.

The little Nash became as popular, if not more so than the Bantam.  It had the advantage of being newer and more powerful and the ability to keep up with modern day traffic on freeways.  Another plus was it was available for all kinds of appearances and parades at any time and, since I owned it, I no longer had to worry about fans scratching up someone else’s classic automobile.  This soon became a problem.  Because of the popularity of the “One Tank Trips” program the car was often recognized before I was.  Everywhere we took it we eventually had to bring along an extra person to watch the car so that some over zealous fan did not cut pieces of the upholstery for souvenirs or try to take home a hubcap as a keepsake.

As we approached the end of the 1990’s I decided it was time to replace the “Met” with a small car that we could carry to the assignments on a trailer.   Use the car at the scene then put it back on the trailer and haul it back home.  I purchased a tiny one-door, one-cylinder BMW 1957 Isetta.  After 15months of frustration of trying to make the cantankerous little car run, I gave up and we moved on to a 1978 version of the Ford Model “A” that I had originally wanted to use in the series.  I bought it from an estate in Ravenna and drove it for about a year and a half.   It just didn’t catch on.  People kept writing to me asking, “Where was the Nash Metropolitan”.  At that time I had loaned the Nash to the Western Reserve Historical Society and they had it on display at their museum at University Circle in Cleveland.

I went to the museum and asked for my car back.

The Nash was with me up until just before the year 2000.  By this time because of a leaky roof, motor problems and my own discomfort driving it I decided once more to find a replacement.

While on a One Tank Trip to Johnstown, Pennsylvania I spotted a tiny red convertible sitting in a used car lot.  It was about the same size as the Nash, but it was more modern.  It was a 1993 Geo Metro Convertible with air condition, automatic transmission and even had AM-FM Stereo radio (All things the Nash Metropolitan did not have).  It had very low mileage and seemed to be in great shape.  We dickered over the price and I drove the Geo home.

Now my garage was bulging.  Something had to give.  The folks at the Canton Classic Car Museum came to my rescue, offering to give the Nash a good home at their museum if I would make a long term loan to them of the car.  I agreed and for the remainder of my time in television I drove the 1993 Geo until my first 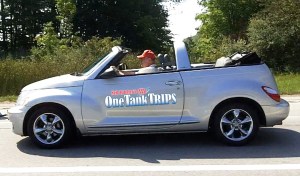 The “new” One Tank Trip car, a 2007 Chrysler PT Cruiser heading down the roads of Ohio to new adventure.

Today:  Bill and Bonnie Cutcher still own the 1948 Chevrolet.  They have sold the 1940 Bantam when they moved to a new home.  The1957 Isetta, I decided, was too cantankerous to ever be on the road again so my wife, Bonnie, and I donated the car to the Canton Classic Car Museum where today it shares space with my Metropolitan.  We decided to sell both the Shay Model A replica and eventually we also sold the 1993 Geo.

I frequently stop in at the Canton Classic Car Museum and sit in the Nash and for a moment recall all the miles we traveled across Ohio and all the friends that we made.

Much to my surprise in 2012 I was asked to return to Fox 8 to do a new series of One Tank Trips on a morning show, “New Day Cleveland.” But, everywhere we go people would ask: “Where’s your car.?”

we decided it was time to get a new, modern One Tank Trip car and following our earlier criteria we wanted an “orphan”, a car no longer manufactured.   A 2007 Chrysler PT Cruiser Convertible filled the bill.  And, most importantly, it has all the modern amenities like air-conditioning, a good heater and a power-raised top.  I hope it becomes as popular with my viewers as the cars of the last three decades were.