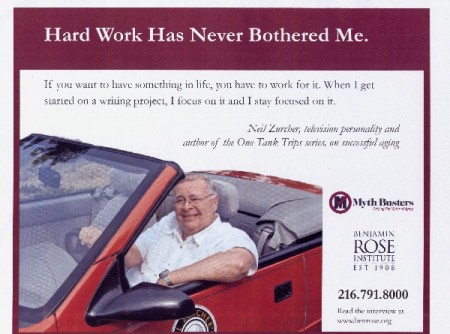 Neil Zurcher as Mr. December in the 2009 Benjamin Rose Calandar

Believe it or not I have become a calendar pinup.  The Bejamin Rose Institute on Aging each year publishes a calendar of senior citizens who are still working or contributing.  Obviously there must not be too many who qualify since I was selected this year.  If you buy the calendar I’m Mr. December. 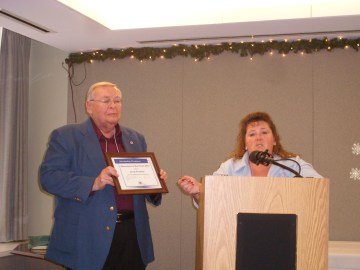 Tuesday, December 2, 2008 I became an immortal.  I had a scholarship named for me.

Of course this is the first time and the only time that the scholarship was awarded.  And not one dollar came out of my pocket.

It all came about because the good folks at the Adventures in Northeast Ohio Tourist Council, made up of tourist organizations in sixteen counties in NE Ohio, wanted to give me their annual “Excellence Award” earlier this year to recognize my half-century in journalism.  As part of the annual award a one Thousand Dollar Scholarship  is also awarded to some deserving person in the name of the “Excellence Award” winner.

So today I traveled to the Oberlin Inn in Oberlin to take part in the Western Reserve Tourist Council’s annual Christmas Luncheon where I was to award the scholarship.  Problem was the recipient,  Jacob Fradette, a student at Lakeland Community College in Lake County, was not present to accept his One Thousand Dollar Scholarship.  He had apologetically explained to the AINEO that he had landed an interview for today with a firm that he hopes to intern with while in school and after being assured by the AINEO that he would still receive the scholarship even if he didn’t come to the luncheon, he kept his appointment for the job interview.

So today for the first, and probably the last time, I got to present the “Neil Zurcher Scholarship”, but there was no one there to accept it.

Another reason I was at the meeting today was to meet with all of these tourist professionals to seek ideas for upcoming stories that I will be writing for the Cleveland Plain Dealer and The Ohio Motorist Magazine as well as my books on Ohio Travel.

Among some of the suggestions was an interesting new museum in Carroll County in eastern Ohio where a Five and Dime Store from the 1930’s has been made into a museum and returned to it’s Depression-era appearance, complete with merchandise.  I hope to get down there to take a look at it soon.  I wonder if anyone out there has visited this new attraction?