Several weeks ago my story in the Cleveland Plain Dealer was only published in east side editions.  So today I am running excerpts from the story for the rest of the folks who may have missed this one.  It’s about the largest grocery store in Ohio that has become a unique tourist attraction:

Well for openers this may be the only food market that has a real antique fire truck inside the store that hovers over one thousand different kinds of hot sauce.  Would you believe that there is a forty-five foot yacht anchored in the seafood department?  A cheese counter with over 1,600 different varieties of cheese?  The fresh produce area fills a space larger than some supermarkets and could serve as an example of a vegetable stand in the Garden of Eden with exotic fruits and vegetables from every part of the earth.

The store is so massive that they offer maps of the building at the front entrance.  They even have a tour guide available for guided tours.  Many people come from three states to just look, but most also come to buy.  Jungle Jim refers to his customers as “Foodies”.  The entrance to this “Foodie” paradise has its own waterfall, pond and life-size fiberglass animals, like elephants and giant birds, grazing amidst manmade palm trees

James Bonaminio, the owner, aka “Jungle Jim” is a grocer on steroids.  Everything about his market place is big and over the top.  The store alone covers a staggering six acres and sits in the midst of what Bonaminio insists will someday be a sort of food amusement park that sprawls over seventy acres of choice realty running along busy U.S. Route 4, the Dixie Highway in Butler County, and north of Cincinnati.

“Different” is the operative word here.  In many grocery stores the public restrooms are usually predictable and places that you only want to visit in extreme emergencies.  Jungle Jim encourages his customers to at least look at his restrooms, even if you don’t want to use the facilities.  He has won an award for the best public restrooms in America. One will give you a chuckle; the doorway is a “porta-potty” that really serves as the entrance to a large, well-equipped, clean restroom.  Another bathroom in the complex can only be described as “luxurious” with marble floors, chandeliers, velvet sofas, paintings and palms.

Also, how many grocers do you know that zip up and down the aisles of their store on a Segway, the two-wheeled personal transporter of the 21st Century?  And the costumes.  Bonaminio has been known to stroll through the store dressed in his trademark pith helmet and bush jacket or as a cowboy, a fireman, and even a wizard.  When he recently was inducted into the Grocer’s Hall of Fame he surprised the audience by accepting the award dressed head-to-toe in gold mid-Eastern garb complete with a turban.

A northeast Ohio native, Bonaminio was born in Lorain.  He began his career in food marketing while attending college in southwest Ohio.  He started out with a roadside vegetable stand not far from where his sprawling complex stands today.  His innovative and sometimes wacky marketing ideas have not only attracted customers but allowed his business to expand, again and again.

As you stroll through the labyrinth of aisles you will find long rows dedicated to canned, frozen and fresh foods from seventy-five different countries and cultures. In many of the departments there are kiosks with free samples. Tucked away in one corner of the store is a small theater where a movie depicting the history of Jungle Jim’s International Market is always showing.  In another spot a life-size, singing animated lion, dressed like Elvis, periodically entertains passing customers.

Jungle Jim’s has a bank, pharmacy, garden center and even a U. S. Post Office facility.

Want to have your wedding in a beautiful place?  How about one with a winding stairway, lobby with grand piano and antique fixtures, where you can make a dramatic arrival by monorail?   You can do it at the Oscar. Oscar is Bonaminio’s middle name and it is the name he gave the new event center that can seat up to 1,200 that has been incorporated into his mega-store.  You can reach it two ways; by steps from the ground floor or you can drive to the mono-rail station at the rear of the property and take a futuristic ride that once was a popular attraction at King’s Island Amusement Park.   The ride will deposit you at the second level entrance to the Oscar Event Center.  You just don’t find attractions like this at your corner grocery store.

Bonaminio has attracted much national attention over the last several years for his unorthodox approach to grocery marketing.   With over fifty-thousand people a week passing through his store he summed it up this way, “This is a serious business.  I’m here to make money.” Then he added with a smile, “But no one said you can’t have fun along the way.” 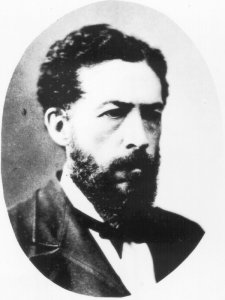 If you are interested in history there is a unique tie-in to the inauguration of Barak Obama as the first African-American President of the United States right here in northern Ohio.

It was 1855 and John Mercer Langston, an African-American lawyer had moved to the small farming community of Brownhelm in Lorain County.  He became involved in community affairs and was elected by the all-white community to the post of township clerk.  Thus becoming the first African-American ever elected to public office in the United States.

A historical marker in front of the old Brownhelm School on North Ridge Road commemorates the event.